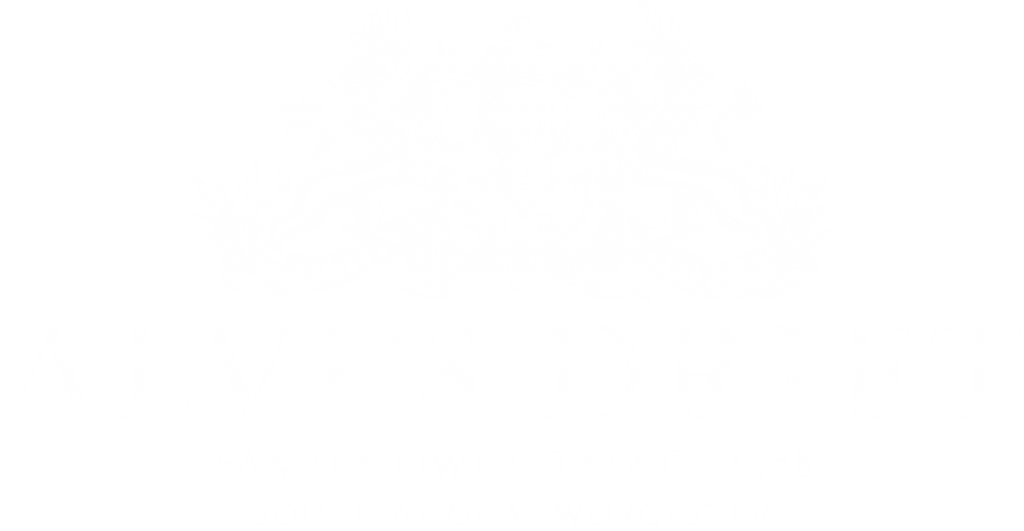 Mon – Fri: 09:00 – 17:00
Please note that our wine tastings are by appointment and tastings should be booked no less than 48 hours in advance.
Cellar Tours by Appointment

The farm Alfalfa was originally bought by Alvi Senior in 1928 and is now owned by Bertie and his two sons Alvi, a GP and Johan, a lawyer. The 5000 hectares piece a scenic mountain, a veld, a riverside and has 19 grape varieties under 360 hectares. The Alvi’s Drift range (named after the low-water bridge spanning the Breede River on the farm) was introduced. The first bottling began in 2005 and has done exceptionally well.

The farm also boasts an intensive dairy operation, managed by Johan van der Merwe. Apart from fresh milk distribution, more than a ton of cheese is made daily. The Alfalfa-Feta is the 2006 S.A. Champion Feta. Apart from traditional cheddar, speciality cheeses such as the Alvi’s drift Port, Muscadel and Hannepoot cheddar are made. Plain Havarti, Cumin and mustard Havarti, as well as Mozzarella are also available.

@dewetcellar is one of the smaller cellars on our

@stettynfamilyvineyards situated on the R43 on the

"You never know how strong you are until being str

Climb the mountain so you can see the world, not s

Looking for the ideal social distancing break away

Are you looking for a new adventure? Did you know

@willowcreekoliveestate is an internationally accl

Friendship is the only cement that will ever hold

"Listen to the silence of nature and hear your inn

"Sometimes the most scenic roads in life are the d

At the end of every storm is a rainbow! We will r

#furbabies are welcomed! Did you know that most of

We are excited about this local product in our val

Sit, Sip, Relax! How much we miss this view! Happy

Life is a journey, enjoy the ride! #wander #expl

Wine industry's wine surplus is 300 million litres, with the new harvest still coming in. This is equal to a whole year's domestic sales. Richard Rushton, CEO of @distellgroup
#alcoholban #lifttheban @landbou's webinar with more than 700 attendees

200m long empty table with a 1000seats in Wellington, #CapeTown to raise awareness of the job lost within the tourism industry due to the lockdown @TimesLIVE @CapeTownTourism @Tourism_gov_za #JobsSaveLives